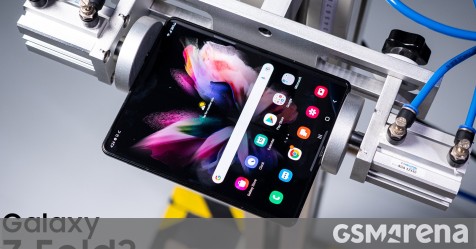 Drop tests have become fairly uneventful, mostly resulting in some shattered glass – makers have figured out how to make a rigid metal frame sandwiched between two panes of glass. But how will a foldable phone like the Samsung Galaxy Z Fold3 5G fare?

The frame on the Fold is made out of Samsung’s proprietary Armor Aluminum material, which should be 10% stronger than the 7000 series aluminum typically used on phones. The external sides are covered with the Gorilla Glass Victus.

While it is closed, the Z Fold3 handles drops a lot like a regular phone thanks to its metal and glass exterior. But what happens if you drop it while it’s opened, which exposes the foldable screen inside? The new PET protective layer of the screen is 80% tougher than what the Z Fold2 had, is that enough? The video below holds the answer:

Between the raised edges around the screen and the pre-installed screen protector, the inner screen did a lot better than you might have expected. And what if the phone slips out of your hand while opening it so it hits the ground half closed? Not much of an issue, as it turns out.

The drop test was performed by PhoneBuff and according to the team over there the Galaxy Z Fold3 may actually be more durable than the S21 Ultra. You should still put a screen protector on the cover display at least and seriously think about a case too.

While the phone continued to work after all drops, there was some serious cosmetic damage that could have been avoided with some protection – remember, screen replacements are pricey. Also, some cases protect the hinge too, which seems more likely to take the hit (perhaps due to the shape and weight of the distribution of the phone).

For more drop tests of the Z Fold3, you can check the Allstate tests.