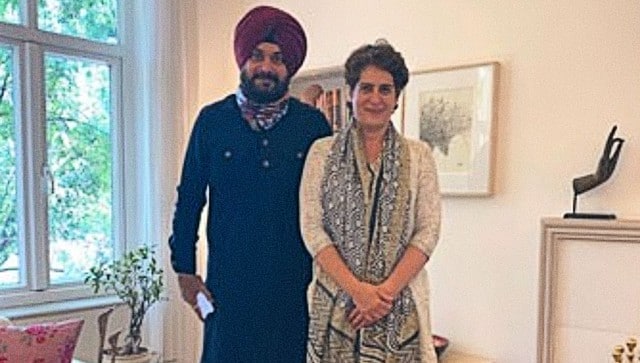 In granting Sidhu his two long-standing wishes, a powerful post and the ouster of Amarinder, the Congress central leadership had completely owned the Punjab restructuring.

According to top sources, no meeting of Sidhu and Rahul Gandhi was scheduled earlier. It was Priyanka Gandhi who took the initiative and convinced Rahul Gandhi to meet Sidhu. ANI

Navjot Singh Sidhu’s histrionic outbursts have scored him a self goal once again. By resigning as the Congress Punjab unit chief within weeks of his appointment, he has demolished his so-called goodwill with Congress top brass, antagonised newly-appointed chief minister of the state and handed his bête noir Amarinder Singh an unsolicited I-told-you-so moment. But most importantly, it is a setback for Rahul and Priyanka Gandhi, who had thought they have averted a crisis in the state unit at last.

Sidhu had been sulking since the past two years, unleashing relentless attacks on Amarinder. The long and protracted factionalism finally spurred the Gandhis to take some radical steps.

They decided to pay heed to Sidhu’s complaints over governance and Amarinder was summoned to Delhi for review meetings. The veteran, however, was not granted audience with the Gandhis during his stay. He was asked by AICC leaders to focus on implementing the party manifesto of 2017 election and was dismissed summarily.

Sidhu, in comparison, did not just meet the Gandhis when he had gone to complain against Amarinder, but was also promoted as PPCC president. Amarinder was forced by the high command to publicly acknowledge his elevation by setting aside differences.

The Punjab makeover had the clear stamp of Gandhi family’s handiwork. However, the final outcome was not something they expected.

In granting Sidhu his two long-standing wishes, a powerful post and the ouster of Amarinder, the Congress central leadership had completely owned the Punjab restructuring.

But it was on Sidhu’s insistence that they agreed to script an unceremonious exit for Amarinder, who had won the state for Congress at a time when the party was at the backfoot in most other states.

Now with Sidhu suggesting he is quitting as he would not “compromise” on certain decisions, has landed the Gandhis in an embarrassing situation just when they were planning a revamp in party structures across states as well as in the central leadership. It only gives further fodder to allegations of turncoats such as former Goa CM Luizinho Faleirio or UP’s Jitin Prasada, who jumped claiming that there is no will to control the downward spiral.

What makes it worse is that the central leadership was completely blindsided. Senior leaders, including Harish Rawat who was made incharge of resolving Punjab crises in the past, continued to send signals that Sidhu might as well be the face of the party in next elections. Sidhu’s resignation appearing on social media and the ensuing shocked silence in Congress that showed that neither the Gandhis nor Channi was intimated before hand.

It was no coincidence that Sidhu got what he wanted but Sachin Pilot in Rajasthan continues to receive just soothing reassurances to keep him placated.

Rejig in Congress’ Punjab unit was to be the proof of concept of the political purge that Rahul has been planning on since he quit the post of Congress president.

It’s no secret that Rahul has been wanting to cut down to size veterans and old-timers who have been dictating terms in the party for a long time. He has been wanting to bring in some young blood, who he believes will help him rejuvenate the party. However, he had made peace with the status quo in the part, firstly because the ageing party did not respond well to the deep churn when it was tried in the past. And secondly, he understood that he would have to co-opt these leaders in the interest of unity, stability and at times the financial health of the party.

Besides, Amarinder and the Gandhis have had their run-ins in the past. This is why Sidhu’s ambition and tough posturing gave the party top brass the hope that this might be their chance to start restructuring the party, one state at a time.

There is proof of this in the past actions of the Gandhis. Rahul made no secrets of his annoyance with the party seniors.

Even when Rahul was the vice-president, his camp was demanding a free hand for him while the old guard scuttled many of Rahul’s reformist ideas.

While choosing the chief ministers of Madhya Pradesh, Rajasthan and Chhattisgarh in 2017, the seniors blocked the younger leaders. They did not like the rootless wonders that Rahul picked in his team. Even before the Lok Sabha polls, it was this team, which had a say on many things, including ticket distribution.

Rahul himself led the war against the old guard. Disappointed with their non-cooperation, Rahul pointed out at the 25 May 2019 CWC meeting that, “At times, I fought alone”.

In his blunt resignation letter as Congress president, he called for responsibility from senior party leaders, no one responded while more than 200 Rahul loyalists resigned. The old guard was not inclined to take responsibility as they were sidelined during the polls.

It is an honour for me to serve the Congress Party, whose values and ideals have served as the lifeblood of our beautiful nation.

I owe the country and my organisation a debt of tremendous gratitude and love.

Rahul and Priyanka had been watching out for a chance since that time. It seems that their bet on Sidhu is unlikely to pay off and the wait for an organisational restructuring might stretch on longer.