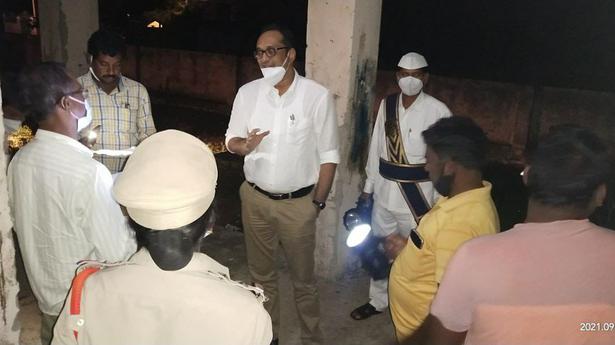 As per the latest information from Srikakulam district administration and Indian Meteorological Department (IMD), the storm lay cantered about 310 km east-southeast of Gopalpur and 380 km east of Kalingapatnam. With the indication of heavy to very heavy rainfall from IMD, Srikakulam district administration evacuated nearly 26,000 people to safe places including cyclone shelters located at different places all along 110 km.

Gales which are expected to move with 65 km speed per hour may damage to paddy and other crops apart from coconut groves located in Uddanam region which had witnessed devastation in October, 2018 with the impact of Titli cyclone. Srikakulam Collector Shrikesh B. Lathkar told The Hindu that the district administration was fully geared up to minimise the impact of the cyclone with the series of preventive measures. “Both NDRF and SDRF teams have already positioned at different places. All the facilities including food, electricity and safe drinking water were provided for the people who were shifted to cyclone shelters. Special teams were formed to restore power and improve road conditions in case of damage with the impact cyclone storm Gulab,” he added.

Srikakulam District Fire Officer Ch. Krupavaram said that all the fire safety officers were on alert with equipment to provide quick relief to the people who are living in low lying areas which were expected to be affected with the impact cyclonic storm Gulab. Indian Red Cross Society Chairman P. Jaganmohana Rao said that IRCS teams would also extend their help to the district administration in places like Itchapuram, Kaviti, Kanchili, Mandasa, Gara, Srikakulam and other mandals.

Share
WhatsApp
Facebook
Telegram
Twitter
Previous articleLetter from Africa: The wonders of Somali cuisine and a taste of home
Next articleMamata Banerjee alleges that Centre didn’t let her go to Rome global peace meet out of ‘jealousy’