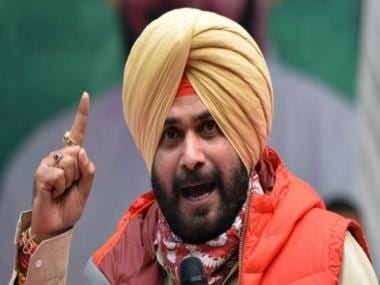 In a letter to Sonia Gandhi, he wrote that he would not ‘compromise on the state’s future’

In a surprise move, Navjot Singh Sidhu announced his resignation as Punjab Congress chief shortly after the state cabinet was announced.

In a letter to Congress chief Sonia Gandhi, which he shared on Twitter, he wrote that he could never compromise on Punjab’s future and the agenda for the welfare of the state.

Sidhu had taken over as the state party chief in July amid a leadership tussle with Amarinder Singh, who stepped down as chief minister 10 days ago while accusing the party high command of humiliating him.

The cricketer-turned-politician didn’t elaborate why he has quit.

“The collapse of a man’s character stems from the compromise corner, I can never compromise on Punjab’s future and the agenda for the welfare of Punjab,” he said in his letter to Sonia Gandhi.

“Therefore, I hereby resign as the president of the Punjab Pradesh Congress Committee. Will continue to serve the Congress,” he wrote.

It is immediately not known what prompted Sidhu to leave the post of the Punjab Congress chief. Sidhu’s resignation has also prompted speculation over the next move of the politician, who was with the BJP before he joined the Congress.

Trouble started brewing on Sunday as a few hours before the new ministers were to take oath, some MLAs wrote to Sidhu, saying the “tainted” Rana Gurjeet Singh should not be made minister since he faced accusations of corruption in sand mining.

Gurjeet Singh, in fact, was removed from the cabinet by then chief minister Amarinder Singh over the corruption allegations. The resignation, months before the Punjab election, has shocked the Congress leadership.

Congress MLA Bawa Henry on late Tuesday night told ANI Sidhu’s resignation has not been accepted and the matter will be resolved soon.

Navjot Singh Sidhu’s resignation (as Punjab Congress Chief) has not been accepted, the matter will be resolved soon. There are 3-4 issues, they are being discussed in the party forum, high command will resolve them: Congress MLA Bawa Henry pic.twitter.com/obK1iR3LGs

Former Punjab chief minister Amarinder Singh, who had called Sidhu dangerous and anti-national, and said he will pit a strong candidate against him to ensure that he doesn’t become the chief minister, was quick to react.

Amarinder, speaking to Indian Express said Sidhu had yet again displayed his “shifty” character by  resigning within two months of taking over as the PPCC chief. “I have known this boy since his childhood and he has been a loner and can never be a team player,” Amarinder, recalling how Sidhu had abruptly left the Indian team in 1996 in England.   “That’s what his real character is”, he added.

Deriding Sidhu’s claim that he was quitting on matter of principle, Amarinder told Indian Express, “What principles is he talking about? He’s only making grounds to quit the Congress. You wait and see, he will join hands with some other party very soon.”

In a tweet earlier Tuesday, Amarinder wrote, “I told you so… he is not a stable man and not fit for the border state of Punjab”.

I told you so…he is not a stable man and not fit for the border state of punjab. — Capt.Amarinder Singh (@capt_amarinder) September 28, 2021

Amarinder has been vehemently opposing Sidhu and has alleged that he has links with Pakistan. The former chief minister has openly challenged Sidhu, saying he will oppose him tooth and nail. Sidhu’s move coincides with Amarinder Singh’s visit to Delhi on Tuesday.

Though it is described as “personal”, there is speculation about a possible meeting between the Captain and the BJP. His media aide, however, said the Congress veteran had come to the capital on a personal visit and will vacate Kapurthala House, where the Punjab chief minister stays during trips to Delhi.

Moments after Sidhu’s resignation, Chief Minister Charanjit Singh Channi addressed the media but chose to focus on the sufferings of farmers due to the three three laws introduced last year by the Centre. When prodded further on the cricketer-turned-politician’s resignation, Channi said he had no idea about the same, while adding that he had complete faith and confidence in the former.

Channi, who took charge last week, is the state’s first Schedule Caste chief minister. The Opposition had, however, charged that he was being overshadowed by Sidhu, who they claimed would end up being the party face when the assembly elections are held.

Razia Sultana later on Tuesday resigned as the Punjab cabinet minister hours after Sidhu quit as the state Congress chief. In her resignation letter to Channi, Sultana said she is resigning “in solidarity with Navjot Singh Sidhu”.

Sultana is considered close to Sidhu. Her husband Mohd Mustafa, who is a former IPS officer, is a principal strategic adviser to Sidhu. Earlier in the day, Sultana was given the charge of the water supply and sanitation, social security, women and child development, printing and stationery departments.

She used to hold the transport department in the Amarinder Singh-led government.

As per News18, PPCC treasurer Gulzar Inder Chahal also quit his post around an hour before Sultana. Chahal sent a one-line resignation letter to Channi without outlining the reason for his decision.

Chahal, an actor-turned-politician, was appointed as the Punjab Congress Committee treasure on 21 September.

Gautam Seth also tendered his resignation as the general secretary (in-charge training) of the state Congress, as per ANI.

Meanwhile, the Aam Aadmi Party on Tuesday claimed that Sidhu quit from his post as he “could not bear” that a Dalit has been made the chief minister of the state. The Congress has sought to burnish its pro-Dalit credentials ahead of next year’s Assembly elections by making Charanjit Singh Channi Channi the first member of the community to become Punjab chief minister.

“This shows that Navjot Singh Sidhu is against Dalits. One poor son was made chief minister. This, Sidhu could not bear. It is very sad,” AAP spokesperson Saurabh Bhardwaj told reporters. AAP Punjab co-in-charge Raghav Chadha termed it “a complete and absolute state of anarchy in Punjab Congress”.

“How can the people of Punjab expect these selfish leaders to give a stable, progressive and inclusive administration? How can these people be trusted with a state which has a 550-km border with Pakistan?” Chadha tweeted.