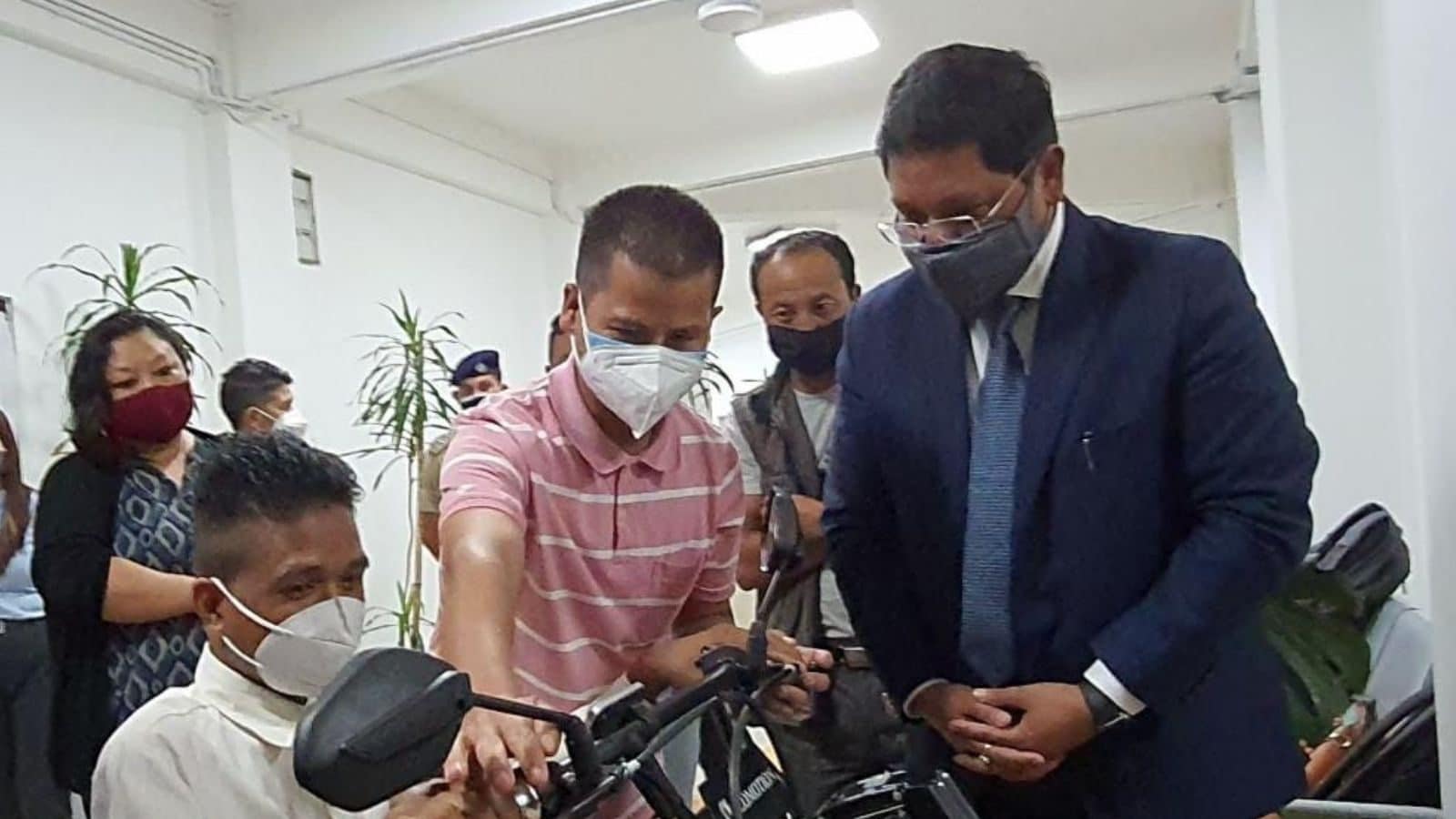 Ryntathiang, a 33-year-old entrepreneur from Mawblei in West Khasi Hills District of Meghalaya was presented with a Neomotion electric vehicle by Chief Minister Conrad Sangma.

Ryntathiang is an entrepreneur by profession and has experienced various struggles in life due to his disability. He has come to the limelight after the recent E-Challenge Entrepreneur program where he had won an award for his enterprise.

This indigenous world-class motorized wheelchair vehicle is aimed at improving mobility for the differently-abled.

Moved by the challenges that Ryntathiang faced, Chief Minister Conrad Sangma had announced that day that we will be giving him some mobility vehicle, some sort of support.

“In the last e challenge entrepreneurship program that we have, he had received an award for the entrepreneur work that he has been doing, in the program when all of us we have seen the challenges that he faces, I had announced that day that we will be giving him some mobility vehicle some sort of support,” CM said.

“Lucky that during this time a new technology was introduced by individuals in Chennai. The timing was very good and I am thankful to the entire team,” said Sangma.

While appreciating the initiative taken by GHP Raju and also the Social Welfare Department team to make this a success, Sangma said, “I hope his entrepreneurial adventure that he is doing will set an example for other differently-abled people in our stare to realize that these challenges shouldn’t stop them achieving their dreams and moving forward.”

Appreciating the young Entrepreneur, he said, it is the courage inside and the will and the strength they must have forward. The wheelchair was bought under the Chief Minister’s Special Grant with a total expenditure was Rs 90,000. including taxes.

He, further said the state government has no plans of distributing this particular unit but other kinds of mobility units are given which are supported by GOI.

Asked about the remaining approximately 44,000 disabled people in the state, Sangma said that the government in past years had organized programs providing different kinds of help to the differently-abled to help them.

Incubated at IIT Madras by NeoMotion, the electric vehicle can cruise at 25 kilometers per hour and can travel 25 kilometers on a single charge.

NeoFly can be used as a standalone manual wheelchair at home which transforms into a rugged, all-terrain vehicle when attached to NeoBolt which is the motorized clip-on unit with a wheel.

Meanwhile, Speaking to media persons Ryntathiang said that he was very happy that the government had now eased his way of traveling since earlier he had to use his hands to walk.

“I will need help since I don’t know how to use it. I think it will take time to get a hang of it,” said Ryntathiang.