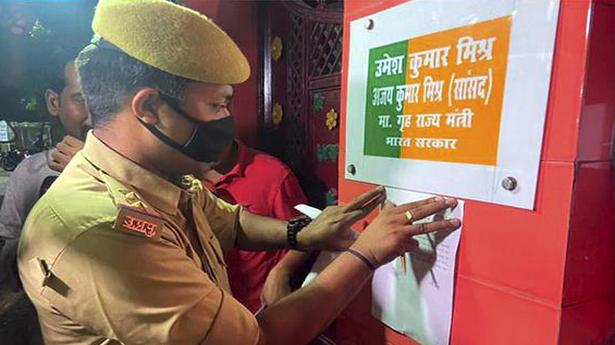 Ashish Mishra, son of Union Minister Ajay Mishra, did not turn up for questioning in Lakhimpur Kheri despite a summons issued to him by police in connection with the Tikonia incident in which he is accused of murder.

His father Ajay Mishra, Union Minister of State for Home Affairs, told reporters in Lucknow that Ashish alias Monu did not go to the police as he was unwell. Responding to questions on whether his son was absconding, Mr. Ajay said Mr. Ashish Mishra had not gone anywhere but was in their Shahpur Kothi residence.

The Union Minister said his son would report to the police on the next date given by them. Mr. Ajay Mishra also said Mr. Ashish Mishra had informed the police that he was willing to provide them evidence, and his statement.

Police in Lakhimpur Kheri pasted a new notice outside the Mishras’ residence summoning Mr. Ashish Mishra to appear at the Crime Branch office in Police Lines at 11 a.m. on Saturday. Legal action would be taken if he did not turn up, said the notice.

“We have all the evidence and we have gathered it,” Mr. Ajay Mishra said.

The Uttar Pradesh police had on Thursday arrested two persons and issued summons to Mr. Ashish Mishra for questioning in connection with the Lakhimpur Kheri incident in which eight persons, including four farmers, were killed.

Amid demands for Mr. Ashish Mishra’s arrest in the murder case, the police issued him a summon to appear at the Reserve Police Lines in Lakhimpur Kheri at 10 a.m. on Friday.

Mr. Mishra maintained that his son was not at the site of the incident or in any of the cars that mowed down the farmers. Mr. Ashish Mishra was in their ancestral village Banveerpur attending the annual wrestling event organised by the family, said the Minister.

“My son would also have been killed had he been here,” he said, adding that hundreds of spectators present at Banveerpur on the day of the event were willing to submit their affidavits on Mr. Ashish Mishra’s presence.

He said the allegations against his son were “fake”. Mr. Mishra said that the probe in the case was done in an impartial manner as, even though he was a Minister, an FIR had been lodged against his son.