Yet in recent weeks, a pungent smell has been wafting in from the water.

In less than two weeks, Olympic swimmers will dive into Tokyo Bay to compete in the triathlon. For residents who live near the shore, that’s an unappealing thought because, despite months of efforts to clean up the water, the bay stinks.

Known for its shoreline of gleaming skyscrapers and iconic Rainbow Bridge, the “futuristic landscape” was selected “at the strong request of international sporting organizations,” according to the Tokyo 2020 Organizing Committee. But in the run-up to the games, problems began to emerge.

In August 2019 a test for the swimming part of the Paratriathlon was canceled after E. coli bacteria was found in the water at more than twice the limit set by the International Triathlon Union, now called World Triathlon. As one athlete put it, the venue “smelled like a toilet,” the Asahi newspaper reported. Since then, the host city has taken drastic steps to try to repair its tarnished image.

It dumped 22,200 cubic meters of sand into the bay to create an environment for organisms that help clean the water. And it’s designed three-layer polyester screens to protect the Olympic swimming venues from E. coli. On top of that the city was already building huge storage tanks to capture flood runoff, so that it can be treated before reaching the sea.

Koichi Yajima, director at Planning and Promotion Division of Bureau of Olympic and Paralympic Games Tokyo 2020 Preparation, said the screen system has been tested since 2018 and will provide a secure environment to hold the games.

Yet in recent weeks, a pungent smell has been wafting in from the water.

“As residents we should raise our own awareness,” said Mariko Watanabe, who said she’s been bothered by the smell and effluent in the Bay and canals since she moved to the waterside six years ago. “The water should be an environment where children can play safely.”

Some scientists are concerned that the city’s proposed clean-up measures aren’t enough.

Yukio Koibuchi, a former associate professor at Tokyo University’s Graduate School of Frontier Sciences, says the proposed measures “won’t reduce the inflow of E. coli much” because the area is a part of a tidal river and the bacteria could flow underneath the screens.

The problem is that the world’s largest metropolis doesn’t have separate drainage systems for rainwater and sewage. So the waste water and sewage from 30 million residents combined with runoff that feeds seven rivers and dozens of subterranean streams and canals all has to be treated before entering the bay.

Tokyo suffers from typhoons and other extreme weather which cause floods that can overwhelm the treatment system. To avoid damage from the floodwaters during days of extreme rainfall, untreated sewerage gets flushed directly into the bay.

Mostly it stays there. The bay is classified as a drowned river estuary, and while it covers an area of 960 square kilometers, it has a relatively narrow opening to the sea and an average depth of just 15 meters. Its salinity is only about 1%, according to research by Koibuchi and others, which means 60% of the water is from the rivers and drains of the city.

Like other old cities including London and New York, the sewers developed over more than a century. “The combined sewer system was introduced in Tokyo in the early 1900s,” according to Tateki Kanno, director of the planning and coordinating division of Tokyo’s Bureau of Sewerage.

Rapid population growth has stretched the city’s ability to keep up. The Shibaura treatment plant, which collects contaminated water from across the business center and releases into Tokyo Bay, was built in 1931, when Tokyo’s population was less than half what it is today.

“Tokyo has the highest effluent load in the world,” said Shigeru Enomoto, a councilor of neighboring Minato ward who has been fighting to clean up the bay for more than 15 years. “The Olympics has highlighted the long-standing issue of pollution.” He has called for the government to build separate systems for sewage and rainwater.

The Tokyo Bureau of Sewerage estimates that would cost at least 10 trillion yen and take over 100 years to do that. “Conversion is not a realistic solution,” said Kanno. Instead the bureau has been building storage tanks to capture and hold waste water during floods until treatment plants are able to process it.

As a result of installing 1.5 million cubic meters of capacity, the number of times waste water flows directly into ocean has fallen to 14 times a year from 56, according to the Sewerage Bureau. The city plans to add 200,000 cubic meters more to meet regulations that will be tightened in fiscal 2024.

For the triathlon and marathon swimmers who begin their events on July 26, water quality has become one of the hazards of the event, and not just in Tokyo.

“Tokyo Bay is not clean by any means,” said Taro Shiraro, a triathlete who’s been competing in races over 30 years. But he said it isn’t as bad as some places where competitions are held. “Triathlon games are increasingly held in urban areas. Not many of them are clean.”

Beyond the games, concerns remain about harmful levels of bacteria. By June last year, the Tokyo Metropolitan Government spent 120 million yen to spread bargeloads of sand from Kozushima Island 170 kilometers away to “create a comfortable environment for aquatic organisms” and “improve the water quality,” said Tomoyuki Higuchi, a director of planning and construction in Tokyo’s Bureau of Port and Harbor. 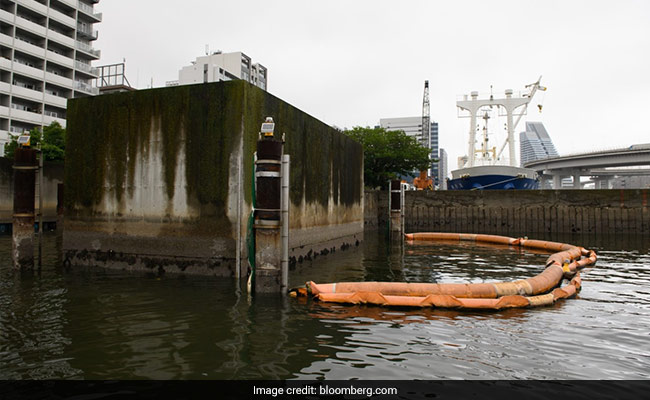 Untreated sewage is directly released into the Tokyo Bay from this facility, about 2km from the Olympic venue.

Higuchi says small organisms such as sand worms and Spionidaes are increasing, but the water quality hasn’t become visibly cleaner yet. “The project will bring a long-term benefit,” he said.

Enomoto conducted an experiment last year on the sediment and said methane released at low tide from sludge below the new sand bed is one of the factors contributing to the bad smell. But he said the presence of bacteria remains a key concern. “E. coli is just an indicator bacterium which is relatively weak,” he said. “If the presence of E. coli is confirmed, stronger ones like dysentery or typhoid may be there too.”

Still, not everyone is in favor of separating the sewage system. Kenji Morita, director of non-profit “Association for Shore Environment Creation” says overtreatment of the sewage could reduce the supply of nutrients that seaweed and shellfish need to grow. “The sea is not a swimming pool, but a part of the natural environment,” he said. “It’s vital to aim for regeneration and preservation of the original environment and use it appropriately.”

(This story has not been edited by NDTV staff and is auto-generated from a syndicated feed.)

“Stay away from him”: Bryce Hall wishes NCT’s Mark Lee on his birthday and...

OUAT UG Registration 2021 Begins, Get Direct Link Here, Apply on or before 31st...