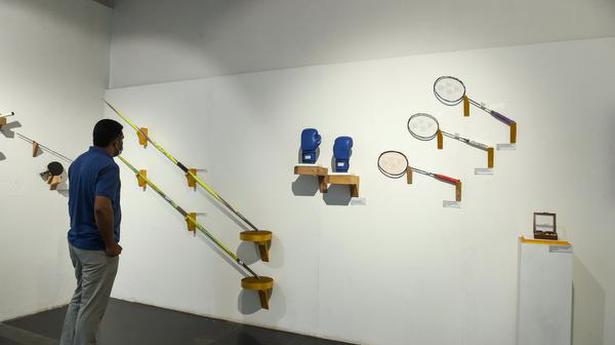 A search for items with zero bids on the website showed 162 items as of 6 p.m. on October 6.

From Olympic medallist P.V. Sindhu’s badminton racket priced at ₹80 lakh to a painting of Prime Minister Narendra Modi with former United States President Donald Trump priced at ₹3.50 lakh, 162 items among the gifts given to Mr. Modi that are on auction had received no bids on the second last day for bidding.

As on Wednesday evening, the auction of 1,348 items at pmmementos.go.in found no takers for some of the featured items, including Olympians’ gear gifted to the Prime Minister. A Culture Ministry official said 1,083 items had already been bid upon as of Monday morning. A search for items with zero bids on the website showed 162 items as of 6 p.m. on Wednesday.

However, many of these items had received bids of multiple crores each during the first week of the e-auction that started on September 17, Mr. Modi’s birthday, but those were found to be disingenuous and removed, another official said.

Meanwhile, the javelin used by gold medallist Neeraj Chopra had received two bids, taking its going price from the base of ₹1 crore to ₹1,00,50,000 as on Wednesday evening.

This was the third such auction of gifts given to Mr. Modi and bidding was set to go on till Thursday evening. Proceeds of the auction would go to the Namami Gange Mission, according to the Culture Ministry.