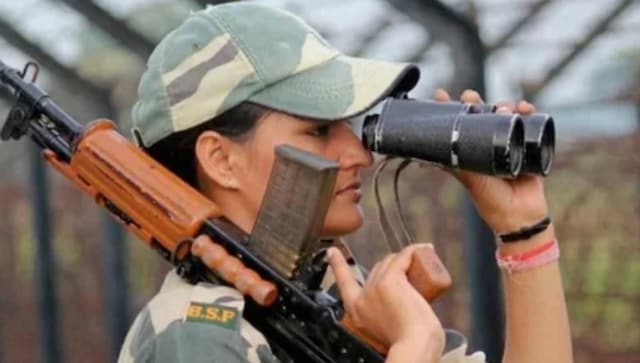 In a first, CRPF has deployed senior IPS officer Rashmi Shukla as ADG of Jammu and Kashmir zone. BSF, too, has for the first time deputed Sonali Mishra, an IG rank woman officer, in Jammu

The BSF and CRPF recently appointed women officers at IG levels in Jammu and Kashmir. PTI

From being given charge of border security to investigating terrorism-related cases, women officers across armed forces are conquering bastions hitherto entrusted only to their male counterparts.

In a first, the Central Reserve Police Force (CRPF) recently deployed senior IPS officer Rashmi Shukla as Additional Director General (ADG) of Jammu and Kashmir zone, one of the largest with six sectors and the most important for the force since it covers almost the whole of north India.

Shukla, who will also oversee anti-terror operations for the CRPF in J&K, is a 1988 batch Maharashtra-cadre officer and one of the senior-most women officers in the country.

Another woman officer at the forefront of anti-terror crackdown in J&K is CRPF Inspector General (IG) Charu Sinha. Sinha, a 1996 batch Telangana-cadre officer, was tapped in to head the Srinagar sector for the force almost a year ago following her handling of the Naxal situation as Bihar IG.

Speaking about her one-year stint as Srinagar IG, Sinha told News18, “My experience so far has been very good. It’s been a year. Importantly, my experience in tackling Left-wing extremism is helping me a lot. It gave me a good grounding, taught me how to reach the community. The type of operations is different here.”

Asked about women officers increasingly being deployed to tackle terrorism, Sinha said, “An officer is an officer. It doesn’t matter. Even if you are tackling terrorism.”

The Border Security Force, too, has for the first time deputed an IG rank woman officer in Jammu. Sonali Mishra, a 1993 batch IPS officer, was recently transferred from force headquarters to Jammu.

“I also served as IG Srinagar frontier in 2017 before joining intelligence branch. I know how to guard my nation and deal with terrorism. We have the same challenges, but the modus operandi has changed. So we are also evolving,” Sonali Mishra told News18.

“I was the first woman to head Srinagar frontier for the BSF. Now, women are joining forces so obviously they will get deployment in such areas as well. Once you wear your uniform, gender doesn’t matter,” Mishra added.

The BSF is a frontline force mainly deployed at the India-Pak border. Mishra is the first woman officer to head the force in securing the border in Punjab, which shares a 553-km border with Pakistan. The area is prone to smuggling and has been witnessing drone activity from across the border.

Mishra previously headed the BSF’s intelligence wing which is famous as the G branch. It collects intelligence from across the network, and after compilation, provides inputs and analysis.

The National Investigation Agency (NIA) is not far behind in putting its women officers at the forefront. The agency currently has six women officers, who make up almost 30 percent of the strength at SP and DIG levels. Officials say this is the first time that six women officers are investigating terror-related cases for the agency.

KB Vandana, a 2004 batch officer from Rajasthan cadre, heads terror investigations for the NIA in her capacity as DIG. The cases in her portfolio include those related to terror recruitment in Hyderabad and Kerala, where terror groups are known to target and radicalize youth.

Her colleague Jyoti Priya Singh heads Lucknow operations for NIA. A 2008 batch Maharashtra-cadre officer, Singh is known for her no-nonsense style of working.