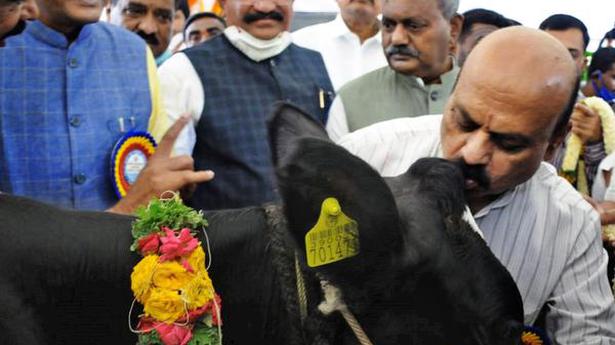 He says it will decrease the federation’s dependence on govt.

Suggesting that the Karnataka Milk Federation (KMF) should start its own cooperative sector bank for milk producers, Chief Minister Basavaraj Bommai on Wednesday announced that the State government will provide the initial capital of ₹100 crore if it comes up with a proposal.

“You have a revenue model and if you choose to open a bank, you will get investment,” Mr. Bommai told KMF directors at a function here, where he inaugurated 10 infrastructure created by KMF, and launched new milk products. “By launching a bank, KMF will not be dependent on doles or financial assistance from the State government. To handhold KMF, the government will commit ₹100 crore as initial investment to the bank,” he added.

His comments came after KMF chairman Balachandra Jarkiholi requested the government among others to increase financial assistance to farmers from the current ₹5 a litre, increase in price of milk, and restarting of financial assistance of 20 paise per litre of milk to about 40,000 testers, helpers, and secretaries working at village-level milk societies. Mr. Jarkiholi also requested government permission to turn to solar power in the district milk unions, and stated that about ₹30 crore could be saved annually from the current power bill of about ₹110 crore if solar power is adopted.

Assuring the KMF that the milk societies employees, who are crucial in milk collection, will be given 20 paise per litre to restart the incentive, Mr. Bommai asked: “Why should the State government give that money? To restart the incentive, we will set aside ₹50 crore in the Budget. But after that, it is your responsibility to continue the payment,” he said.

Setting a target of procuring 100 lakh kg of milk in the next flush season from the current high of 91.2 lakh kg, the Chief Minister also said that the market should be expanded to meet increasing procurement. “If milk from Andhra Pradesh and Maharashtra can come to Karnataka, why cannot the market be expanded. You should be aggressive in marketing because you have good products,” he said.

Currently, the the 46-year-old KMF reports an annual turnover of about ₹17,000 crore and milk procurement has peaked to about 91.2 lakh kg a day from its 25 lakh farmers. With over 150 milk products under its fold, the federation has also exported ₹300 crore-worth products to about 50 countries. It also supplied over 77 lakh litres of UHT milk to the Indian military annually.

Earlier, Mr. Jharkiholi also urged the Government to receive the milk supplied under Ksheera Bhagya in UHT or flexi packs since it would enable the KMF to supply fresh milk to children. Currently, the KMF supplies milk powder that is converted to milk. About seven lakh litres of milk is supplied under Ksheera Bhagya. Mr. Jharkiholi said that if more than 25 lakh litres have to be converted to milk powder, then the KMF has to turn towards private sector, and fresh milk supply would prevent this. “As it is KMF is supplying 1.5 crore litres of UHT milk to Andhra Pradesh and Telangana.