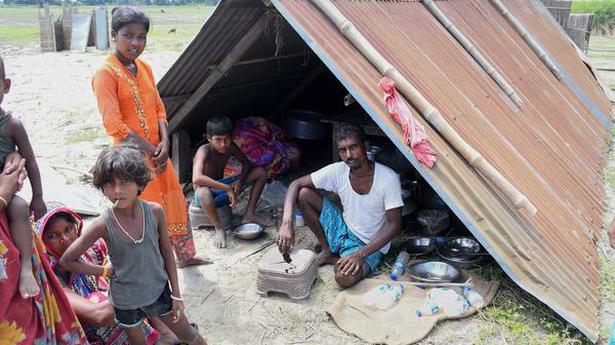 Sheikh Farid would often jog to school about 2 km from his house at Dhalpur No. 2 village in northern Assam’s Darrang district. He ran twice the distance to his death by a bullet on September 23.

Farid, a 17-year-old student of Class 9, was one of two persons killed in police firing during a drive to free government land of alleged encroachers. Maynal Haque, 27, of Dhalpur Hill village was the other.

“We did not know when he slipped out of the house during the day and where he went. When we found out, it was too late,” Abdul Khaleque, Farid’s father said.

Farid and a few others had alternated between a sprint and brisk walk to Dhalpur No. 3 village where, according to the police, a large crowd armed with stones, sharpened bamboo sticks, machetes and spears had gathered to resist the eviction drive. His friends watched helplessly as he slumped to the ground after catching a bullet in the chest.

“They killed my son illegally. The government must give us justice so that other fathers do not lose their sons for their right to have a roof over their heads,” Mr. Khaleque said, grieving the death of the youngest of his four sons.

Several kilometres away at Dhalpur Hill, Mokbul Ali said his son Maynal paid the price of being perceived as a foreigner despite their being “genuine Indians”. “My son may have shown aggression in the heat of the moment, but did he deserve death and treatment like vermin (referring to a photographer stomping on his son’s body)?” he asked.

Maynal was also shot in the chest.

Faizur Rahman, a villager, said the people the government has labelled as encroachers have been living in the area for decades. “Many came here after their lands were eroded by the Brahmaputra River. All have land deeds, are bona fide voters and none have been excluded from the National Register of Citizens,” he told The Hindu.

A day after the violence that left 11 policemen injured, besides civilians, Assam Chief Minister Himanta Biswa Sarma hardened the government’s stand and said the eviction drive will continue. But he admitted that it may “not be important to involve the police while evicting people”.

The government has a target of freeing 77,000 bighas of land from “encroachers” — all Bengali-speaking Muslims — for an agriculture project for indigenous people. About 3,000 families have been living in this area, comprising more than 20 villages, about 60 km from Guwahati.

Wondering how “10,000 people gathered in a place that had 60 houses” to attack the police, Mr. Sarma insisted that the eviction drive was not carried out overnight. “It was carried out on an agreed principle that the landless people would be provided with 2 acres of land each,” he said.

The Chief Minister said an inquiry would be conducted into the Dhalpur firing by a retired judge of the Gauhati High Court.

On Friday, leaders of the Congress and organisations such as All Assam Minority Students’ Union staged a protest against the “barbarism of the State machinery” in the conflict zone under the Sipajhar Police Station.

“We also demand the immediate suspension of the Deputy Commissioner and the Superintendent of Police (Sushanta Biswa Sarma, the CM’s brother),” Mr. Borah said.

The Chief Minister said the question of suspending or transferring the two officers did not arise.

All India United Democratic Front chief Maulana Badruddin Ajmal condemned the firing incident and the victimisation of the minorities in the name of eviction.