Georgieva’s future at IMF still unclear after marathon board meeting 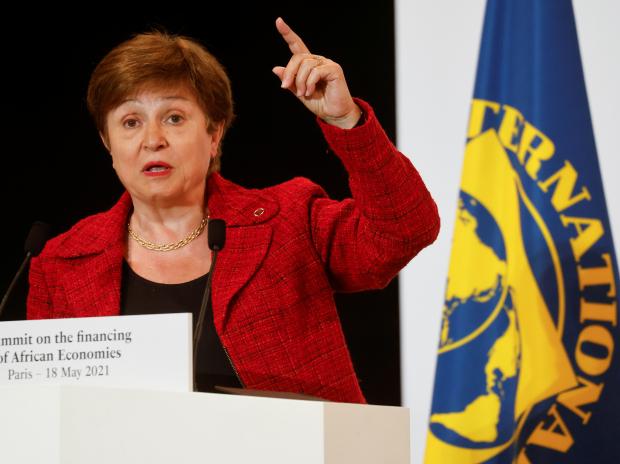 The International Monetary Fund’s executive board ended a five-hour meeting about the future of Managing Director Kristalina Georgieva without a decision on Friday, saying it would seek more information about claims she pressured World Bank staff to alter data to benefit China in her previous role.


The IMF said the board had made “significant progress” in its review of the World Bank data-rigging scandal, but agreed to request “more clarifying details with a view to very soon concluding its consideration of the matter.”

It was not immediately clear if the board would meet again before the start of next week’s high-profile meetings of the IMF and World Bank, where Georgieva is due to play a prominent role in presenting the global lender’s newest economic forecasts.


Some European governments backed the Bulgarian economist to remain IMF chief at Friday’s marathon meeting, according to people familiar the matter.


Other officials sought more time to review discrepancies between accounts by Georgieva and the WilmerHale law firm hired by the World Bank to investigate data irregularities in its flagship Doing Business reports.


Georgieva said she had answered all the board’s questions and remains at the board’s disposal as it concludes its review.


Georgieva has strongly denied https://www.skdknick.com/wp-content/uploads/2021/10/2021.10.06-Statement-of-Kristalina-Georgieva-to-IMF-Executive-Board.pdf the allegations, which date back to her time as chief executive of the World Bank in 2017. Her lawyer claims https://www.reuters.com/business/imf-chief-georgievas-lawyer-claims-data-probe-violated-world-bank-staff-rules-2021-10-07 that the WilmerHale probe violated World Bank staff rules in part by denying her an opportunity to respond to the accusations, an assertion WilmerHale disputes.


China has not commented on the findings of the report.


A French finance ministry source told Reuters that France planned to voice support for Georgieva at the board meeting. Britain, Germany and Italy were also expected to back Georgieva, another source briefed on the matter said. She also received a statement of support from African finance ministers.


Officials at the French, British and German embassies in Washington had no immediate comment. The Italian embassy did not immediately respond to request for comment.


But hopes for any quick consensus on her future at the IMF faded amid uncertainty over the U.S. position.


The U.S. Treasury, which controls 16.5% of the IMF’s shares, declined to comment after Friday’s meeting.


Treasury spokesperson Alexandra LaManna said earlier this week that the department has “pushed for a thorough and fair accounting of all the facts” in the ongoing review. “Our primary responsibility is to uphold the integrity of international financial institutions,” she said.


Friday’s marathon executive board meeting, held behind closed doors, followed lengthy meetings with Georgieva and the WilmerHale lawyers earlier in the week..


WilmerHale’s investigation report prepared for the World Bank board https://thedocs.worldbank.org/en/doc/84a922cc9273b7b120d49ad3b9e9d3f9-0090012021/original/DB-Investigation-Findings-and-Report-to-the-Board-of-Executive-Directors-September-15-2021.pdf alleged that when Georgieva was World Bank CEO in 2017, she applied “undue pressure” on bank staff to make data changes to the flagship “Doing Business” report to boost China’s business-climate ranking.


Europe’s backing is important since the IMF chief has traditionally been chosen by European governments, with the U.S. administration nominating the World Bank’s president.


France in 2019 backed Georgieva, a former senior European Commission official, as a compromise candidate to break a deadlock over the successor to Christine Lagarde, now European Central Bank president. She is the first person from a developing economy to head the institution.


The issue is expected to dominate next week’s annual meetings of the World Bank and the IMF.


Current and former staff from both institutions said that no matter who is to blame for the altered data, the scandal has dented their research reputations https://www.reuters.com/business/world-bank-imf-face-long-term-damage-after-data-rigging-scandal-2021-10-04, raising critical questions over whether that work is subject to member country influence.


Anne Krueger, a former World Bank chief economist and IMF first deputy managing director, argued in a blog post https://www.project-syndicate.org/commentary/world-bank-doing-business-scandal-by-anne-o-krueger-2021-10? on Thursday that Georgieva must step down to restore the Fund’s credibility.


“Should Georgieva remain in her position, she and her staff will surely be pressured to alter other countries’ data and rankings,” Krueger wrote. “And even if they resist, the reports they produce will be suspect. The entire institution’s work will be devalued.”


(Reporting by David Lawder and Andrea Shalal in Washington; Additional reporting by Leigh Thomas in Paris and Bart Meijer in Amsterdam; Editing by Marguerita Choy, Cynthia Osterman and Lincoln Feast.)

(Only the headline and picture of this report may have been reworked by the Business Standard staff; the rest of the content is auto-generated from a syndicated feed.)